Before I owned a 3D printer I had never used a CAD program before, let alone a 3D one. After purchasing my first printer I needed to learn 3D CAD and I wanted to do it with a free App if possible.

As I prefer to use a laptop/mouse when drawing anything, I stuck with the desktop version of the 123D Design App. It is also available for the iPad too. But the version I will be looking at here is the PC version.

The first version of 123D Design that was around early 2014 was usable but had plenty of bugs that would crash the whole App. Therefore saving your work regularly was vitally important. Thankfully the subsequent versions have solved most of the crashing problems and have introduced even more functionality into this great App.

The user interface is nicely laid out. With a toolbar running across the top which contains all the commands you could need in a CAD program. From Primitives, Shape Sketching to more advanced operations like Splitting Surfaces and Mirroring, 123D Design pretty much has 3D CAD covered. 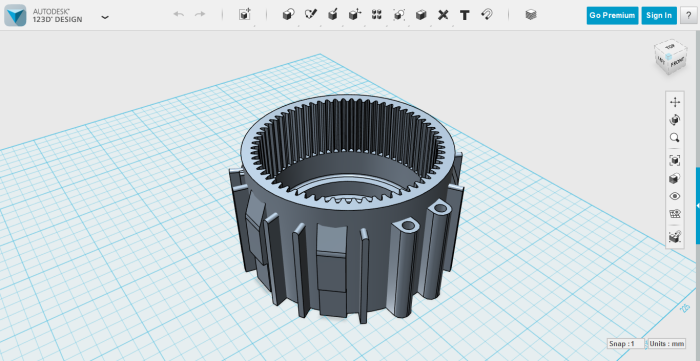 Navigating around your 3D object is a breeze. The mouse is used to pan the camera around and it also allows you to zoom in and out for editing the smaller details of your models.

You can send your creations directly to a 3D Printer or you can export them to .STL files where you can load them up into Makerware etc. for final adjustments before printing.

If you want to learn 3D CAD and don't want to spend any money, this is a great App to use and build your own 3D objects.

ZX Spectrum Next in a Spectrum +3 CaseDecember 15, 2017Read more