Okay, so I haven't printed too many large objects on the 3D Printer. The largest so far has been the Sinclair C5 model which, although not too big takes about 4 hours when printed on the medium quality setting on the Makerbot Replicator 2.

So, with the upcoming release of the new film Terminator Genisys I decided to head on over to Thingiverse and see if there were any cool Terminator models that could be made.

Sure enough, I found this cool T-800 head mounted on a rather nicely made stand.

I wanted to print this as big as the Replicator 2 could handle, so I scaled it to about 250mm tall. As well as printing it as large as possible, I wanted to also print it on the medium quality setting (0.2mm). Having used the preview option in MakerWare it helpfully told me it would take around 15 hours.

This was a little too long for me, I prefer to be in the same room as the printer whilst it is working. Just in case theres a problem with the filament etc. So in order to reduce the time slightly, I reduced the fill rate from 10% to 5%. This alone, according to the preview, would save about 3 hours, and would alow me to start it at about 8am and have it finished for 8pm. Perfect!

With that changed, it was time to choose the filament colors. With the Replicator 2 only having one extruder, it meant swapping the filament over manually, which was fairly easy as you can program into the Makerbot the precise height in milimeters that you want it to stop using the Z Pause Height option which is available when the print has started. 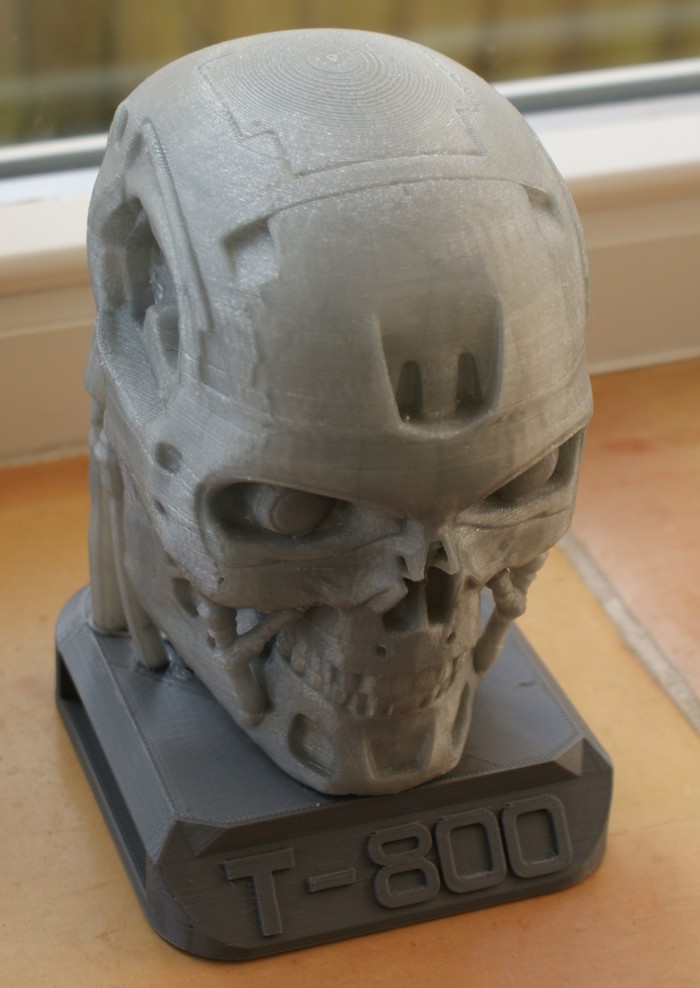 All was going well until about 2 hours in and the extruder was hitting against bits of hardended plastic. On closer inspection the printer had started to do a solid layer on top of the usual "honeycomb" fill pattern that it does on large hollow objects.

As the fill rate was set to 5% (rather than the default 10%) the plastic was curling back up on itself when the printer was doing the flat fill part as there was nothing for the plastic to stick to. Using a 10% fill would have reduced this problem a lot, but with it 2 hours into the build I decided to leave it to it.

So, 11.5 hours later we had the completed print. All we need to do now is paint the eyes a suitable shade of Red!